Disruptive US operator T-Mobile has become the leading sales channel for smartphones in the US, according to new research from Counterpoint.

T-Mobile overtook Verizon to take the number one smartphone sales spot, having been a distant fourth just two years ago. This change is viewed as indicative of a broader change in the way smartphones are being purchased in the US, with the cost of devices increasingly uncoupled from the service contracts and, if needed, paid for via conventional financing arrangements.

“The US market has undergone significant shifts in the power of the different sales channels with the move to unsubsidized plans,” said Neil Shah of Counterpoint. “The growth of T-Mobile through its different ‘Uncarrier’ moves, the removal of subsidies and enticing subscribers with ‘Simple Choice’ & ‘Jump’ plans, has helped the operator to become the top smartphone sales channel in the USA.

Samsung and Apple together captured almost two-thirds of the total smartphone shipments share at T-Mobile, with Samsung leading. However, it will be an uphill task for T-Mobile to maintain this lead ahead of Verizon and continue to attract millions of subscribers to its network. The move to unsubsidized and unlocked has also boosted demand in the open channel, which continued to contribute close to 10% of the total shipments in Q1 2016.” 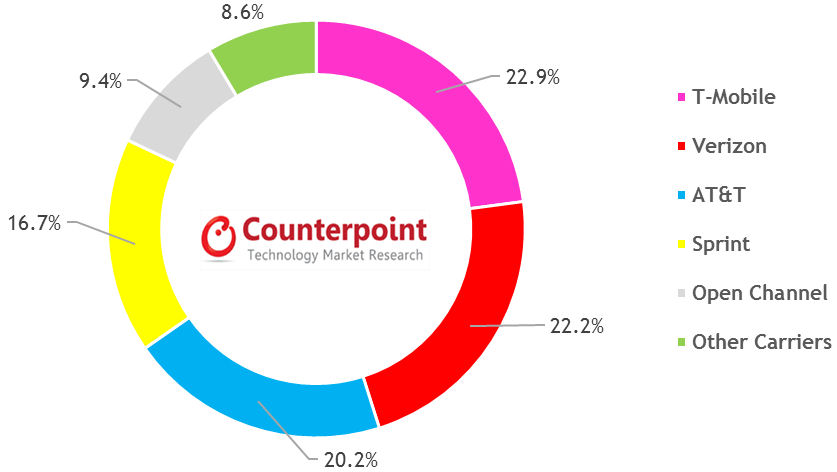 US smartphone sales on the whole declined by 4% year-on-year due to the maturity of the market (most people already have a smartphone) and a lengthening on the upgrade cycle. The latter factor will be a direct result of the shift in buying habits as fewer consumers are being prompted to upgrade their subsidized phones by the renewal of their postpaid contracts.

“The US market decelerated due to softness in Apple iPhone demand and iPhone SE demand not materializing until Q2 2016,” said Jeff Fieldhack of Counterpoint. “Carriers continued to push subscribers to non-subsidy plans as for the first time more than half of the combined subscriber base of the top four carriers are now on non-subsidized plans. This is a significant shift from the subsidy-driven model just ten to twelve quarters ago. This has changed the basis of competition in US mobile landscape.

“The focus has shifted to creating more value for the consumer, instead of being device-driven. Unsubsidized device sales have educated consumers that flagship smartphones are costly. This has led to a temporary softness in the device upgrade cycle; the in-carrier upgrade run rate continues to be in 5-6% range per quarter. Handset manufacturers will continue to push hardware and marketing limits to entice subscribers to not defer upgrading.”